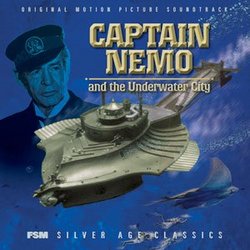 Captain Nemo And The Underwater City

FSM resurrects a delightful fantasy score—and offers a tribute to the great composer Angela Morley (aka Walter "Wally" Stott, as billed on the film)—with the premiere CD of Captain Nemo and the Underwater City (1969), a Jules Verne-inspired family adventure produced at MGM's British studios.

Morley's charming symphonic score to Captain Nemo and the Underwater City highlights the film's fanciful underwater seascapes with a mixture of classical and modernist approaches. The main theme is a buoyant waltz (evoking the Victorian era) and the atmosphere generally light, though it darkens and pulses for the film's adventure and suspense (such as scenes involving the undersea "Mobula" monster). Like many B sci-fi/fantasy films, this production may have fell into relative obscurity, but its score captivated youngsters who caught it on television and searched in vain for a soundtrack album—until now.