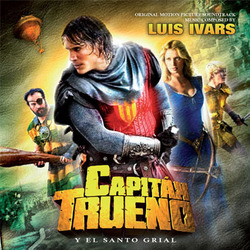 Captain Thunder (or Capitan Trueno in Spanish) is one of the most popular comic book heroes in Spain and the long-awaited film version depicting his adventures calls for nothing less than a truly epic, big and heroic orchestral score.

We are happy to work with yet another brilliant Spanish composer - Luis Ivars - on this album, presenting a very exciting score that will be appreciated by fans of such esteemed action maestros as Alan Silvestri, Hans Zimmer and Basil Poledouris. Of particular notice is the catchy Captain Thunder Theme, but there are many other thematic ideas to be explored in this complex work, which balances beautiful orchestrations and ethnic colourings with subtle electronic elements.

First edition of the CD is limited to 500 copies.