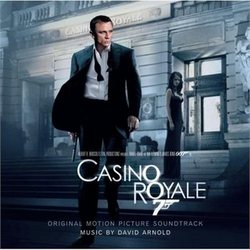 With Casino Royale, the James Bond franchise gets a "reboot", ala Batman Begins, and a new actor (Daniel Craig) has come in to replace Pierce Brosnan after four outings as 007. In this film, we see how Bond achieves his "license to kill" status, and how he became the "James Bond" that we\'ve come to know. The plot of Casino Royale sticks pretty closely to the original Ian Fleming novel, with Bond going up against Le Chiffre (Mads Mikkelsen), banker to the world\'s terrorists, in a game of high-stakes poker at the Casino Royale. Apparently Le Chiffre made a few bad bets, and Bond hopes to beat him to force him into a position whereby he will have to comply with MI6 - or be killed by his terrorist backers for losing their money. Treasure official Versper Lynd (Eva Green) is assigned to work with Bond to make sure he doesn\'t lose at the casino, and she provides the love interest in the film. Casino Royale shows us where Bond came from, and over the course of the film, he is hurt - both physically, and emotionally.

Due to this character arc, as well as the fact that Bond hasn\'t yet "earned his stripes", it\'s no surprising that for his fourth outing as Bond composer, David Arnold doesn\'t make much use of the James Bond theme until the end of the film. In its stead, we get subtle hints and nods at the theme, while being exposed to plenty of thematic material based on a song that Arnold co-wrote with Chris Cornell, "You Know My Name". Arnold also penned two love themes, which have a pleasing John Barry-esque orchestration.

The album starts out with "African Rundown", an action cue with plenty of staccato brass and fast string work to remind us that it\'s certainly a James Bond score. The addition of ethnic percussion and plucked instruments help add a dash of flavor as well, befitting of the post-title chase sequence in Madagascar. Splashes of melodic phrases from "You Know My Name" show up here, as well as through much of the album. A love theme for the first Bond girl, Solange (Caterina Murino) is heard in "Solange" and "Trip Aces", the latter of which gives us a taste of the Bond theme as well. The other love theme is heard in "Vesper", and then subsequently in "City of Lovers" and "Death of Vesper", a tender melody performed primarily on strings and pianos.

There are a few times that the James Bond theme starts to peek through, but turns out to be a rendition of "You Know My Name", allowing it to serve as an ancestor to what will be come the well known Monty Norman theme. "Aston Montenegro" and "Dinner Jackets" both work towards that effect, but also in "Dirty Martini", "Bond Wins it All" and "Fall of a House in Venice", among others.

The longest action track on the disc, "Miami International", showcases Arnold\'s action writing, without heavy use of electronic elements, a feature that divided fans in the past two Bond scores. It uses bursts of "You Know My Name" throughout, as do the other action tracks, "Stairwell Fight" and "The End of an Aston Martin". There are also a number of low key tension cues, usually heard when Bond is exploring, or playing poker at the casino ("Unauthorised Access", "CCTV", "The Tell", "The Bad Die Young").

By the end of the film, Bond has gone through a lot, leaving him emotionally and physically scarred. He\'s had a bit of character-building in the process, and appropriately enough, he\'s now earned a full version of the James Bond theme. "The Name\'s Bond... James Bond" is just that - a swaggering, full of bravado rendition of Monty Norman\'s classic melody, with all the trimmings. It\'s a great way to end the album.

Due to legal issues of some kind, the "You Know My Name" is absent from the Sony Classical soundtrack, but will be released as a single on Interscope Records, making this the first even James Bond soundtrack to lack the main title song. Additionally, Sony Classical is releasing 13-extra minutes of score as an iTunes exclusive, thus allowing collectors and fans to have all the cues that Arnold recorded for the film. While many of these cues are short and repeat some material from the regular release, they do include the pre-title sequence, as well as a few dramatic and tense action moments. (We\'ve amended our track listing above with the bonus tracks.) But if anything, the regular soundtrack release could have been a bit shorter; the album doesn\'t play through as solid a listen as I would have liked, but collectors and fans will be happy to have every scrap of music available.

David Arnold\'s score to Casino Royale doesn\'t break any new musical ground, but it does allow a fresh restart on the Bond franchise to successfully take hold and grow. He has cleverly given us an ancestral melody to the James Bond theme, and his music supports the film rather well without becoming over the top or weighty. With the film\'s 150-minute running time, and only 85-minutes of score, there are some great swaths of screen time that are quiet - allowing the actors and the story to play out. It\'s a shame the song isn\'t on the soundtrack, since it would have gone perfectly right at the end of the disc, but picking up both the score and song single should satisfy most fans.