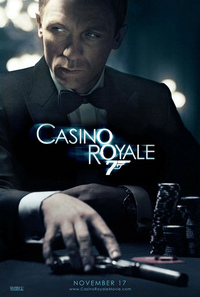 After Die Another Day, the producers of the highly successful James Bond franchise decided to convert the last remaining Ian Fleming novel yet to truly be brought to the big screen, which also happened to be the very first James Bond adventure - Casino Royale.  The decision to go back to the beginning also required getting a new actor to play the British secret agent.  With the controversial choice of Daniel Craig (dubbed by some "James Blonde"), much intrigue was swirling around Casino Royale, which was to be directed by GoldenEye director Martin Campbell, based on a screenplay by Neal Purvis, Robert Wade, and Oscar-winner Paul Haggis.

Casino Royale follows Bond on his first real mission as a 00-status agent (with a license to kill).  Bond follows a lead that brings him to Le Chiffre (Mads Mikkelsen), a banker servicing many of the world\'s terrorists.  After Bond thwarts a plan by Le Chiffre to short airline stock, Le Chiffre suddenly owes his clients a lot of money - or his life is forfeit.  Sensing an opportunity, M (Judi Dench - the only holdover from the previous Bond films) sends Bond to compete against Le Chiffre in the high-stakes poker tournament at the Casino Royale in Montenegro.  Joining Bond is Treasury agent Vesper Lynd (Eva Green), who is assigned to keep an eye on the money: Bond has to win the tournament to force Le Chiffre into surrendering to the British authorities.

Casino Royale was a smash hit, proving skeptics wrong about Craig, and successfully rebooting the franchise for a new generation of fans.  Released on DVD back in 2007, the original 2-disc release was surprisingly light on extras, and rumors of a more substantial "special edition" were floating around.  Finally, just in time for the sequel Quantum of Solace, the new 3-disc DVD "Collector\'s Edition" of Casino Royale was released, and it is certainly the release that fans have been eagerly awaiting.

With the first disc containing the feature film, the visual quality is actually improved a bit from the original 2007 DVD release.  The transfer is identical, but there seems to be less compression artifacts. It\'s certainly an excellent image, with the opening grainy black-and-white sequence looking very film-like, and the remainder of the film maintaining a natural quality and color balance throughout, with strong contrast and black levels.  The audio is presented in English and French Dolby Digital 5.1, and like the original DVD, packs quite a whollop. An immersive sound field plunks the viewer right in the middle of the action, dialogue is crisp and clear, and David Arnold\'s punchy and emotional score shines nicely.

Conspicuously missing from the original DVD release was a commentary track. Making up for that omission, we\'re given a rather informative track by director Martin Campbell and producer Michael G. Wilson. They discuss the evolution of the project, and the challenges faced with rebooting the Bond franchise. It\'s a great conversation that the two have, as they reminisce about the ups and downs they experienced making the movie.  Even better, a second track features a crew commentary - with edited comments from seventeen(!) individuals who worked on the film, from the screenwriters, to composer David Arnold, to the stunt coordinator, and more. It\'s a fascinating track, and you learn an immense amount of material, compacted down into the film\'s running time.  Well worth a listen.

On the second disc, we\'re given the same extras that were on the original 2007 2-disc DVD release.  Slightly fluffy, they still give a taste of deeper things to come.  "Becoming Bond" (26-minutes) is a condensed making-of featurette that looks at the film from the novel through the adaptation, casting, and filming.  "James Bond: For Real" (23-minutes) focuses more on a few of the action sequences, and how the filmmakers decided to take Bond back to basics, with less fantasy and more realism. "Bond Girls are Forever" (49-minutes) was a 2006 television special hosted by Bond girl Maryam d\'Abo (The Living Daylights), and takes a look at a significant chunk of the female cast from throughout the Bond series, and their experiences with their respective films.  "You Know My Name" is the music video featuring singer Chris Cornell as he sings the film\'s main title.

The third disc brings us all the new featurettes - finally!  First up are four "Deleted Scenes" (8-minutes), which expand out some moments from the film, including Bond\'s hospital recovery towards the end, an expanded prologue, a bit more dialogue and banter between Bond and Vesper.  Short but sweet, and all presented in 16x9 anamorphic video.  "The Road to Casino Royale" (26-minutes) is a great look at the long journey that Casino Royale had, from the original novel to the modern film version. Featuring interviews with a huge array of people including producers, screenwriters, friends of Ian Fleming, historians and more, the various attempts are explored (including the Peter Sellers spoof), and all of the legal battles are discussed candidly and informatively.  The logical follow-through, "Ian Fleming\'s Incredible Creation" (21-minutes) takes a more in-depth look at the novelist himself, his background and how Bond was created. An exploration of the origins of the modern spy community is also looked at, and it\'s a truly fascinating piece.

"James Bond in the Bahamas" (24-minutes) looks at the pivotal role that this small Caribbean country has played through the history of James Bond, from acting as Fleming\'s home, through to serving as a location shoot for the various Bond films.  The companion piece to this featurette is "Ian Fleming: The Secret Road to Paradise" (24-minutes), which looks more at Ian Fleming\'s associates and how they directly (or indirectly) influenced his work on the Bond novels.  "Death in Venice" (23-minutes) brings us back to the filmmaking of Casino Royale with an in-depth look at the challenges faced with bringing the Venice climax of the film to life. From location shoots, to miniatures, to stage shoots, and even underwater tanks, every aspect is explored.  "The Art of the Freerun" (14-minutes) looks at the fascinatingly fluid "urban sport" created by Sebastien Foucan (who also appears in the film).  A lot of behind-the-scenes material from the Madagascar sequence is included here, and it\'s great stuff to see.  "Catching a Plane: From Storyboard to Screen" (14-minutes) takes us through the Miami Airport sequence with storyboard comparisons, behind the scenes footage, and more.  We\'re also given a chance to look at a "Storyboard Sequence" which lets us watch the Freerun chase through storyboards (11-minutes), or with a storyboard comparison (10-minutes).

Finally, we have "Filmmaker Profiles".  Not to be mistaken for some EPK-styled text screens, we instead are given solid featurettes on each major filmmaking crew member, with additional behind-the-scenes footage and interviews.  Running 53-minutes long, we look at director Martin Campbell (11-minutes), special effects supervisor Chris Corbould (8-minutes), cinematographer Phil Meheux (8-minutes), stunt coordinator Gary Powell (8.5-minutes), 2nd unit director Alexander Witt (7-minutes) and composer David Arnold (10-minutes). Obviously the last segment is most interesting to SoundtrackNet readers, and we get some great comments from Arnold about the evolution of the themes in the film, as well as behind-the-scenes footage from the scoring sessions and song recording sessions with Chris Cornell.  What is still missing? The theatrical trailers and any marketing.  Oh well.

Casino Royale successfully rebooted the Bond franchise.  It\'s a high-octane film, with plenty of action and emotion. It shows us how Bond became the Bond that we all know, and makes him human - flaws and all.  It took a while, but we\'re finally given the extras that we really wanted the first time around, and if you haven\'t picked it up yet, Casino Royale is worth snagging.  Even better, it will come with MovieCash towards Quantum of Solace, so you essentially get another movie for free.