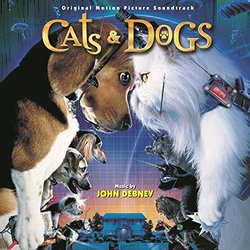 Imagine if the rivalry between cats and dogs wasn't just a feud created in the minds of pet owners, but actually existed as a secret war right under our noses?  What if not only could our beloved furry pets speak (in English, no less), but also had the ability to use hi-tech gadgetry, martial arts, and military weaponry?  That idea is explored in the summer hit Cats & Dogs.  Professor Brody (Jeff Goldblum) is working on a formula that will immunize people from being allergic to dogs.  The evil Persian cat Mr. Tinkles (Sean Hayes) won't let this happen, and he sends his secret operatives out to destroy the formula.  However, the Brody family is protected by their misplaced secret agent beagle, Lou (Tobey Maguire).  With the help of his fellow canines, Lou sets out to stop Mr. Tinkle's evil scheme.  Underscoring this delightful and entertaining film is John Debney's slinky and brassy spy-edged score.

The score's tone is set right from the "Main Titles".  With a bit of Mission: Impossible edged "spy" music, Debney really knows how to hit the right notes.  (No doubt he had some practice for this one having done Spy Kids earlier in the year.)  In many ways, this film was a live-action cartoon (I had even heard that when in the early stages of development, the film had been planned to be an animated feature), so it comes as no surprise to have a lot of "cartoonish" music, ala Carl Stalling.  "The Neighborhood" is a great example of this, with a playful orchestra, and a strong "family" theme.  "Meet Mr. Tinkles" starts off with a harpsichord (now considered the universal instrument for "evil"), and then segues into more spy music for "The Formula" (as well as in "Meet The Team", and "Blasting To Headquarters").

Debney seems to have had fun with this score.  "Kung-Fu Kats" gives him an opportunity for some Asian-flared action music.  "The Russian!" is a full-on action cue, where an adorable kitten wreaks havoc not only on Lou, but the house as well.  "Tinkles Plots / Limo Ride / Flocking Factory" is another cue that stands out as a great bit of action.  Because of the "Stalling" effect, many of the cues tend to run all over the place, with a great deal of Mickey-Mousing. But that's something that should be expected.

"Lou Saves The Day" is the big heroic cue, as expected, with all of the themes making an appearance as he takes down Mr. Tinkles.  In the obligatory "Oh no, he's dead!  Wait, no he's not!" ending, "Lou's Alive!" is warm and fuzzy - just the right amount of schmaltz to make you crack a smile.  The score ends with "Dress-Up Time For Tinkles", a reprise of the main "family" theme that quickly goes into "French Maid"-mode, replete with accordion as Mr. Tinkles arrives at his new home, only to find that he will be forced to wear tiny housemaid uniforms.

Running only about 34-minutes long, this album was just about the right length; I don't think any more score cues would have added too much to it, due to the significant amount of Mickey-Mousing.  But with a few strong themes and some great spy music, it's rather enjoyable.  I found myself to be more interested in the spy music than the tender family stuff, probably because I really enjoyed Spy Kids.  But I'd say this one might be worth picking up if you enjoyed that other album, or if you really enjoyed the film.