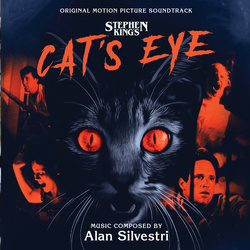 Intrada announces a new release of Alan Silvestri's 1985 score for Cat's Eye to coincide with the new 4K restoration of the film, and featuring new artwork! The score comes between two of Silvestri's more famous works: the 1984 hit Romancing the Stone and the 1985 classic Back to the Future. It is perhaps his last work before he became well known, hurtled into the public eye with Back to the Future just a few months later. Performed electronically, Silvestri opens the score with a pulsating heartbeat motif and eerie strains that accompany a close-up of a feline eye peeling open. This leads to a madcap sequence where Silvestri introduces two primary ideas: a buoyant chase theme that conveys the cat's relentless need to keep moving and a gleaming melody for the cat's heroics that plays like a trial run of his Back to the Future theme.

Highlights from the score were previously available on LP, not necessarily in film order and with track titles created expressly for the album. For this expanded CD, Intrada obtained from the composer his own two-track stereo session mixes, went back to the studio paperwork to determine the original cue titles and adhered more or less to the overall film sequence.

Based on Stephen King's short stories, Cat's Eye begins with a cat having a vision of a little girl (Drew Barrymore) calling to him, and he sets out to find her. The cat's journey takes him through three different tales – the first to "Quitter's Inc.," a mysterious company offering to help people quit nicotine addiction; the second to "The Ledge", the penthouse of a gambler; and the third, "General", where he finally meets the little girl who was unconsciously summoning him to save her from a pint-sized yet deadly troll.