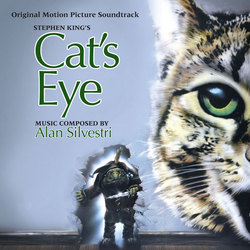 Alan Silvestri's 1985 score for Cat's Eye is perhaps his last work before he became well-known. Performed entirely electronically, Silvestri opens the score with a pulsating heartbeat motif and eerie strains that accompany a close-up of a feline eye peeling open. This leads to a madcap sequence where Silvestri introduces two primary ideas: a buoyant chase theme that conveys the cat's relentless need to keep moving and a gleaming melody for the cat's heroics that plays like a trial run of his Back to the Future theme.

Highlights from the score were previously available on LP. The contents were sequenced with maximum listening pleasure in mind rather than adhering to strict film chronology. As such, some sequences were edited together when musically appropriate and other sequences were simply dropped altogether. Track titles were created expressly for the album. For this expanded CD premiere, Intrada obtained from the composer his own two-track stereo session mixes and went back to the studio paperwork to determine the original cue titles and adhered to the overall film sequence more or less.