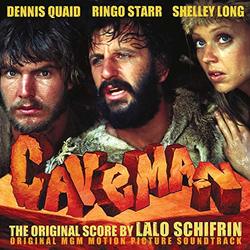 Caveman is an odd 1981 film starring Ringo Starr, detailing caveman life in a comedic fashion with scarcely any dialogue, the one aspect to be proud of from the effort is the score by Lalo Schifrin. Even when I saw this film as akid (mainly because it featured dinosaurs), the music stood out to my young ears, which were newly developing a passion for the under-rated art form and still ringing due to the never ending rotation of my 2 LP The Empire Strikes Back.

With nary a spoken word by the actors, Schifrin has few obstacles for his music, sort of the parodist flip side to 1981's Quest For Fire and the opportunity it provided composer Philippe Sarde. The score begins in the with a simple wood block and bass drum rhythm, setting up the primitive society immediately before adding low horns, then flute and xylophone all presenting the main thematic material – a catchy, bouncy, travelogue-type melody, which still harkens back to Schifrin's Latin heritage. This "Main Title" is part of an opening ten minute track on this inaugural CD release, which then moves into woodwind sonorities not unlike those that open Stravinsky's great concert work, The Rite of Spring. Threatening horns and swirling strings are heard, spelling danger for the caveman. Later, comical woodwinds come into play, no doubt underscoring the titular hero as essayed by Ringo Starr. Strange vocals and whispering float atop then accompany a tribal, percussive version of the catchy main theme before finally a rock & roll bass and drum set is rolled out. I seem to recall this actually being performed on screen, but don’t hold me to that, it’s been years since I saw the film!

The following track, "The Kissing Plant", begins with plaintive woodwinds and pizzicato strings, in a sweetly innocent guise. This then develops into a rendition of Maurice Ravel's Bolero for whatever reason Schifrin and/or the director saw fit to include it. "The Horn Lizard" starts with sprightly strings and woodwinds, followed by tremolo cellos and a rising horn statement which then lead sharply into more declarative chase music, still in a overt comical fashion. Harp glissando and small sting ensemble surprisingly open "Tyrannosaurus Rex", but suspenseful pizzicato strings soon take over building to a brief syncopated, strident outburst.

"Homo Erectus" presents a Schifrin-tailored obvious homage to the opening of Richard Strauss' Also Sprach Zarathustra, forever now associated with the film 2001: A Space Odyssey. More threatening music is to follow with the low brass and swirling strings again, but is interrupted with "Colonel Bogey's March" from Bridge on the River Kwai, which I am sure works with the onscreen antics. "Pterodactyl" is the next longest track on the album and wastes no time in diving into some sweeping thematic material, not unlike what would be heard for a sea epic. Morekinetic, tongue-in-cheek action material follows, something akin to what Elmer Bernstein composed for the 1980 comedy classic Airplane, interspersed with lighthearted woodwind passages. The music often seems to follow the onscreen activity a bit too closely, making for a somewhat meandering listen on its own at times.

"March of the Caveman" finally returns to the great main theme in a solid, two minute, brass and drum slice of fun. "Prehistoric Dance" bounds forward in an off-kilter toe-tapper, accented by brass and drum hits, then more powerful statements from the low horns. A fanfare-fragment of the main theme follows, then there is rising anticipation in the full orchestra and finally relaxation in the form of sweetly innocent strings and woodwind material and a resounding crescendo. "Caveman (End Title)" returns proudly and mightily to the groove-infected main theme and with its sharp snare accents it could almost be marching band material.

Overall, I think the first and last tracks, plus the march, are the primary reasons to obtain this album, as some of the inner tracks, though solid in their composition and orchestration, do not work as well away from the picture. Plus there is a heavy amount of interpolating from existing classical concert works, which might work to provideknowing laughs from an audience, but make for a somewhat schizophrenic listening experience.