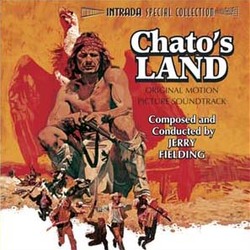 Made in 1972, during a particularly fertile period in Michael Winner\'s career, Chato\'s Land was an efficient, violent western, made when the genre, thanks in the main to The Wild Bunch, was going through quite a resurgence. In the same year alone, audiences where treated to The Culpepper Cattle Company, Dirty Little Billy, High Plains Drifter, The Revengers, Joe Kidd, Ulzana\'s Raid, Bad Company, The Great Northfield Minnesota Raid, The Cowboys, and quite a few others, as well as the tail end of the Italian Western boom.

Winner\'s film can hold its head up high with these titles. Its a rather humourless, fairly violent, revenge saga, with Charles Bronson playing a native American with great skill and empathy. His physicality is well deployed, and, for a man of 50+ he is an extraordinarily virile presence.

Working for the third time with Winner (after 1971\'s Lawman and 1972\'s The Nightcomers) Jerry Fielding extended his development of the western genre still further with this menacing, dramatic score.

Fielding\'s metamorphosis from jazz arranger to composer of highly complex and emotionally textured scores is one of the most startling transitions in recent film music history. When the project called for it, he totally eschewed his jazz roots and immersed himself to the requirements of the film. His western scores are a case in point. Only rarely did he hark back to his jazz influences in this milieu (the militaristic drum riff in the opening titles to The Outlaw Josey Wales for instance), instead producing highly dramatic orchestral scores that progressively relied on a clutch of motifs that he readily replicated in score after score, whilst still imbuing each film with its own musical stamp.

In truth, there is an argument that he overused these motifs and orchestral flourishes in score after score, but his work until recent years has been so underserved on CD that only the most avid follower would have noticed, plus which, bless him, they still worked time after time anyway. Its amazing that the ending of the track \"Fire and Stampede; Joan of Arc at the Stake\" is replicated exactly for the killing of Terrill by Josey Wales in The Outlaw Josey Wales and still works brilliantly.

Fielding sets out his stall for the Chato\'s Land score in the \"Main Titles\", a tense, militaristic track that peaks several times with brass fanfares before devolving into suspenseful string and snare drum longeurs. It\'s a similar opening to Lawman and sets the scene for the score as a whole.

As a listening experience there are long passages with little to alert one to the fact that this is a western score. The tracks, although using a wide orchestral canvas, seem to concentrate on the internalised state of Chato as he evades the posse who methodically track him down after he kills a town sheriff in self defence. In fact, stretches of the score reminded me of another Winner film he worked on, Scorpio (1974). That this score still works well in the context of the western is testament to Fielding\'s abilities to immerse himself in the emotional actions and reactions of his protagonists whilst eschewing typical Aaron Copland-esque trappings of accepted genre conventions.

Completely original however are tracks such as \"Indian Rodeo; Chato Bags a Horse\" which contain much native American percussive riffs. \"Ride Like Hell\" is a short, but very effective reprise of the main titles, with a surprisingly upbeat forcefulness which is absent from the rest of the scores more serious-minded approach.

Overall, the score to Chato\'s Land is a fairly propulsive, muscular affair, light on melody, but long on rage, implied violence, and undiluted machismo. There is a relentlessness to the music which perfectly matches Winner\'s film.

Intrada have opened up the score into 21 relatively brief tracks, which makes for less than a marathon of pretty much the same music that Bay Cities previously presented in two suites.

Fans of Jerry Fielding will have little to moan about, others may be a little frustrated that the score never really cuts loose, the rage building but only spasmodically releasing. But these were the early 1970\'s. Nihilism ruled. Even Michael Winner wasn\'t tempted to offer an easy thrill ride, and thus the score doesn\'t give up its riches in predictable ways.