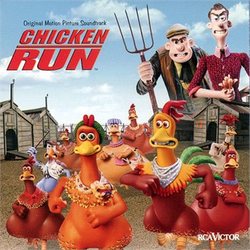 by David A. Koran June 20, 2000
4 / 5 Stars
Now, here's a movie this summer I actually had no doubt in my mind was going to be good and entertaining. After getting the summer movie season off to a bang/whimper with Gladiator, Dinosaur and MI2, I found that I was longing to see Chicken Run for some sharp relief from the blockbusters. This is not to say that Nick Park and Aardman Animation's latest theatrical entry won't make it big, but most of the characterizations and style of animation (claymation) are foreign to most American audiences. I believe, however, the film turned out great for both children and adults, and will have an easy time finding an audience.

The soundtrack is advertised as being from the team who brought you Antz, mainly John Powell and Harry Gregson-Williams. If I mention they are also part of Hans Zimmer's Mediaventures team, most film music purists foam at the mouth thinking another cookie-cutter synthesized score. However, as heard in their introductory scores, The Borrowers (Gregson-Williams) and Face Off (Powell), nothing could be further from the truth. Out of all of the musicians in that stable, these two are the most promising prospects in years. Chicken Run proves that pairing these two guys up again can prove better than their work on their last collaboration Antz, which was also released by Dreamworks.

You can tell by listening to the score, that they carried over many of their melodic techniques from Antz, mainly keeping it fun, but also by paying homage to folks like Randy Newman and Elemer Bernstein. Mr. Bernstein was ripe for the picking since his work on Chicken Run's forefather and inspiration, The Great Escape, was one of his best and most memorable in his career. Chicken Run's direct tribute to The Great Escape is most noticeable in its opening credits sequence which had all the adults in the audience laughing aloud. This inside joke, along with many of the similar sequences in the film would have not worked as effectively unless the music worked right along with them. When talking to Austin Powers' composer, George S. Clinton, about scoring comedy, he said the hardest thing to do was to write music to help sell a joke or a gag. In animation it's doubly so, and John Powell and Harry Gregson-Williams have gotten the knack of it here. This isn't to say they went the traditional route of "mickey-mousing" the action, but in turn, created extremely strong and well thought-out set of themes and melodies. You usually don't get that much in modern music for animation and it's refreshing to hear it here.

One knows when a score works well for a film is when a sequence, a montage of action in this case, is solely accompanied by sound effects and the score, and it's just as good one where the characters are simply conversing with each other. Even the songs used "in the film" work well. The work mainly because they are used to move the story along or provide some additional depth to the character. That in itself, nowadays, is an achievement. The main theme, a heroic little ditty, will stick with you once you leave the theater as well as every time to finish listening to the CD. Once again, a major accomplishment for a soundtrack these days. If it weren't for Zimmer's and Limp Bizkit's reworking Lalo Schifrin's original melody in Mission: Impossible 2, I'm sure I wouldn’t have had anything to take away from that film, let alone the Holst sound-a-like from Gladiator from this summer's other "big" film. One could hope that Michael Kamen (X-Men) and John Williams (The Patriot) can add to the melodies of summer and us film music fans have something to listen to for the rest of the year.