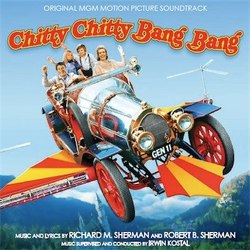 Perseverance Records is proud to announce the reissue of the soundtrack to Chitty Chitty Bang Bang. This is a 2-CD reissue of the Kritzerland limited edition release.

Best known for their many songs written for Walt Disney Pictures, the Sherman Brothers, Richard and Robert, took on the task of creating songs for the film—their first ever non-Disney venture. Producer Cubby Broccoli thought the Shermans would be the perfect duo to write the songs for the film. While they were still with his studio, Walt Disney gave the brothers his blessing to work on the project due to a clause in their contract that allowed them to do so. They were involved with the film for about a year but went to England for three months to write the music.

This is an exciting project for our label as Chitty Chitty Bang Bang is one of the most beloved family films of all time. This is a release that should never be out of print. For that reason we are going to make this an unlimited/limited release. Judging from past sales for this soundtrack, we felt that there are many, many fans in both the collector's as well as the retail market who would love to own the excellent Kritzerland deluxe edition release.

Our limit has yet to be determined, but if demand remains steady, we'll keep making them. Our deal with MGM allows for us to license 3,000 at a time, and we will give fans ample time to buy up their copies. We know there are enthusiasts all over the world who love the music and might have missed out on the Kritzerland edition. We want to make as many fans as possible happy!

- Quality remastering of a classic soundtrack recording by James Nelson and Bruce Kimmel. Special thanks to Bruce Kimmel!
- Beautiful 12-page booklet, designed by James Wingrove, containing liner notes, stills from the film, and trivia.
- 2-CD set features the music from the original LP/CD releases + bonus tracks, music from the song & picture album, Richard Sherman demos and playback tracks. Special thanks go to Richard Sherman for letting us license the bonus material on Disc 2.