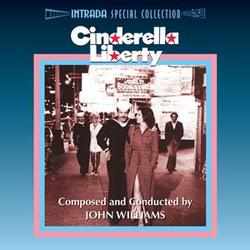 At the start of the 70s John Williams was still in the transition phase from being TV journeyman composer Johnny Williams to becoming the distinguished, lauded master of Hollywood scoring he is today. In 1973, a year before Jaws would make him a household name, and four years before Star Wars would reinvigorate symphonic film music and elevate Williams to the very top of the pantheon,he was scoring smaller, character driven pictures. Films like The Paper Chase (1973), The Long Goodbye (1973), The Man Who Loved Cat Dancing (1973), and this Intrada Special Collection issue - Cinderella Liberty (1973), a bittersweet modern romance starring James Caan and Marsha Mason as a sailor on leave and the whore he falls for. Caan\'s star was in the ascendant after the double-whammy of Brian\'s Song (1971) and The Godfather (1972), and this was ostensibly a star vehicle to show off his considerable acting skills in a genre most fans had not seen him in.

As this was the early 70s, R-rated romances were not unusual. The movie brats were on the rise and the old Hollywood studio system had all but collapsed. A vast majority of films were now being directed by the new generation of cine-literate directors such as Coppola, Scorsese and Lucas, or the breed who had migrated from live TV in the early 60s such as Frankenheimer, Lumet, Pollack, Jewison . A handful of directors had made the jump from acting to directing with much success in this period. John Cassavetes is an obvious example and Mark Rydell another. Rydell acted in film and TV in the early 60s before turning his hand to directing. This salty tale was superficially similar in style to the same years\' The Last Detail, but despite its swearing and nudity, it ultimately had a warm heart, helped immeasurably by the pairing of Caan and Mason.

Beginning in features with The Fox in 1968, Mark Rydell quickly built up an impressive canon of films, perhaps most well known for The Rose (1979) and On Golden Pond (1981). He followed up The Fox with The Reivers (1969) and The Cowboys (1972). These two films had been scored by John Williams and so the two continued their working partnership with Cinderella Liberty.

Working for the first time together on a contemporary story, the score is both tough and tender, with more specially scored source music than actual underscore. It\'s a hugely pleasing soundtrack, underpinned by the love theme Nice to be Around, and the presence of harmonica soloist Toots Thielmans. This poignant melody weaves in and out of the score, a sexy, sinewy tune that never outlasts its welcome, and speaks of love found, and of love that can never last. If your exposure to Williams is via Star Wars, Superman, Harry Potter, and Indiana Jones, you\'d be hard pushed to recognise Cinderella Liberty as being penned by him. But those familiar with The Eiger Sanction (1975), Earthquake (1974), and The Sugarland Express (1974), will spot this plaintively romantic pop-style of scoring that was very much in vogue then. It\'s interesting to note that Williams is one of the last composers who still actually give us bona fide themes. Almost all movies used to have memorable and recognisable themes. Those of us old enough to remember will recall numerous LP compilations of movie themes, and even love themes – even if the film had no love interest at all it still had a love theme! Williams was and is an exemplifier of strong themes and in that respect this score fits in nicely with the rest of his canon.

The source music that makes up much of this score has some memorable cues. \"New Shooter\" for example is terrific blast of brassy funk that could easily pass muster as the theme to a cop show of the time, and shows that Williams the younger could happily mix it up, and wasn\'t so symphonically hidebound by his own pre-eminence and audience expectation that he couldn\'t groove along like the jazzman he once was. Although never scoring to directly reflect the two characters innermost thoughts, the net result of the soundtrack is to create an atmosphere that fully encompasses the milieu that Baggs and Maggie inhabit, a sleazy, sexy, wistful, sad and adult world where love is the last thing anyone expects but can dare to dream of.

Ultimately, with the exception of the Paul Williams vocal \"Wednesday Special\", this is very much a variations-on-a-theme soundtrack, but please don\'t let that put you off. \"Nice to be Around\" is such an irresistible composition, and Williams is able to wring every melancholic, sadly-sweet note out of it during the course of the CD\'s brief 35 minute running time.

Anyone thinking his retro-style theme to Catch Me if You Can (2002) was a stretch should revisit this soundtrack. It\'s light on genuine underscore but listen in context and listen just to hear a sound at what is now the far distant edge of the palette of one Hollywood\'s greatest living composers.