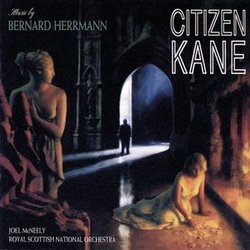 Joel McNeely seems to have a true love for Bernard Herrmann's work. First he did the re-recording of Vertigo for the restoration of the film, and it sounded absolutely perfect. Being able to conduct the Royal Scottish National Orchestra to perfectly match Herrmann's conducting 30 years previously truly took amazing talent. Then he recorded Torn Curtain, Psycho, and The Trouble With Harry – all of which sounded exceptionally accurate and resulted in near perfect performances. Now he has tackled what some consider the score to the best motion picture ever made: Citizen Kane.

After many delays, the complete re-recording of the score has finally been released, and it sounds absolutely stunning. From the beginning brooding tracks ("Prelude", "Litany"), the listener can get a sense of the dark underbelly of Kane. The score picks up with memories of Kane's childhood, in "Manuscript Reading and Snow Picture". Many of the cues are very quiet – you have to turn your volume up to hear the orchestra. But be warned - some of the cues (such as "Galop") are rousing upbeat passages that might catch you off guard.

Thematically, Herrmann's score was quite robust. There is the "older" Kane theme, the dark somber music that starts the album. There's the more upbeat, peppy "young go-getter" Kane theme, found in such cues as "Kane's New Office" and "Kane's Return". Things start to get a bit sadder, however, in such cues as "Susan's Room" and "Mother Memory". The best cues on the album are (for me) the best cues in the score. "Salaambo's Aria" is pure brilliance in its large operatic presentation, and Janice Watson does an exceptional job as the soprano soloist. The other one is the "Finale" cue - the sheer power of the music as it goes from the optimistic Kane theme into the terrifyingly dark Xanadu theme (with the large orchestral chords) still sends chills down my spine.

Citizen Kane was (and still is) a brilliant film. The score was truly a masterpiece, and it is wonderful that Varese Sarabande's Robert Townson continues to produce re-recordings of Herrmann's works with the aid of Joel McNeely and John Debney. Now that Kane has been done, I honestly don't know what else I will be looking forward to.