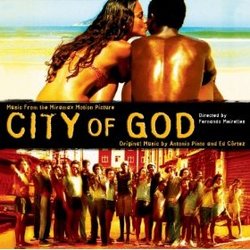 Milan Records presents the funk, soul and samba soundtrack to the new Miramax film, City of God. Composer Antonio Pinto and Ed Cortes combine their score with tracks from some of Brazil's most famous musicians including Hyldon, Tim Maia, Raul Seixas, Cartola and Simonal, to create a soundtrack rich in Brazilian culture and emotion. Their timeless score enhances the film's gritty portrayal of poverty, violence and urban decay in a way that attracts you to the painful story.

City of God is a brutal, compelling real life story of the very mean streets of 1960's-1980's Rio de Janeiro. The soundtrack, a combination of classic rock and funk, mixed and more specifically Brazilian-flavored fare, is equally energetic and intriguing.

Told through the eyes of a young photographer, Busca-P�, the film shows multiple generations of young gangsters in the Cidade de Deus (City of God) section of Rio. With each violent death of a gangster, another even more violent gangster takes his place. What is the most shocking is how young these gangsters are. Though frenetic and actually fun in places, the film never loses sight of how vicious its subject matter is, and the violence never seems glorified or indulgent. Moreover, we as an audience never lose a real sense of threat, and as Busca-P� nears escaping the streets and getting a legit job at a newspaper, we worry that he may not make it out alive.

The soundtrack firmly roots the story in the time periods of the film, from the 1960's to the 1980's, with era-specific music. While doing that, the music is still emotionally relevant and complementary to the scenes and also culturally specific. Perhaps in the only way the subject matter could be watchable, the music pushes us rapidly from scene to scene; we are taking in the environment without it sinking in too deeply all at once. There is a good balance between fast-paced club and lounge music and slower, more emotionally poignant pieces.

The one downside to some would be that the soundtrack has few unified themes or motifs. As a collection of source pieces, we never get one single vision of the place. Honestly, though, this criticism is not valid, given that the whole point is to show how eclectic and diverse the setting is.

For listeners who like Latin sounds or are fans of the film, this is a great CD. Also, if you are interested in getting into Latin music, this is a good choice, given how accessible the pieces here are. If you are not any of the above, this is probably one to stay away from.