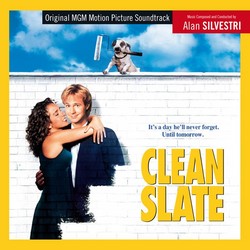 For Clean Slate, Alan Silvestri composed a madcap comedy score with a film noir feeling to it. Silvestri's playfully atmospheric approach would be nabbed somewhere between Toontown and Chinatown, saxophones, piano and lush strings. The score's tone seamlessly blends playful danger and sultry romance. Silvestri first employs the kind of suspicious string gestures, piano percussion and winking flutes that he'd used for mysterious comic menace in Death Becomes Her and Back to the Future Part II.

In The Perez Family, with the sounds of soulful rhythm as inseparable from Cuban culture as the air itself, Alan Silvestri had interpreted the beats of these mambos and rumbas as film scoring for the fun, ethnic action of Romancing the Stone, Summer Rental's comedic energy. But it was with 1991's Soapdish that the composer finally broke into full dance step as a brilliantly novel way to swing with the outrageous eccentricity of daytime drama.

For this romantic comedy-drama, Alan Silvestri based his main theme from the classic lullaby melody ''Drume Negrita'' written by the Afro-Cuban jazz kings of Cuba's golden, Ernesto Grenet. The score is filled with a melancholic vibe, Cuban rhythms and a very heartwarming melody.