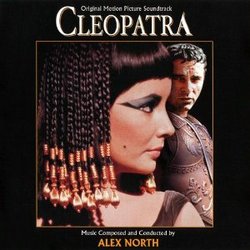 It is probably the most expensive film ever made, costing nearly $400,000,000 when adjusted for inflation. Cleopatra is based on one of the classic historical romances between the Queen of Egypt and the Caesar of the Roman Empire - and then between the Queen and Marc Antony. Directed by Academy Award-winning screenwrited Joseph L. Mankiewicz, the production of Cleopatra starred Elizabeth Taylor in the title role, with Richard Burton as Marc Antony and Rex Harrison as Caesar. The mountainous task of writing a score for the four-hour long epic fell on the shoulders of Alex North, who provided a highly original and intriguing score.

Beginning with the "Overture", the main theme heard here is one that symbolizes Cleopatra's ambition. Heavy on the strings and accompanied by guitar, mandolin and harp, this main theme is rather seductive and is first heard in the film in "A Gift for Caesar". The "Main Title" theme is more traditionally romantic, symbolizing the love between Cleopatra and Caesar. The other main theme used in the film is the one showing the love between Cleopatra and Antony, first heard in "Most Becoming".

Much of the album is comprised of incidental music ranging from Roman-styled brass fanfares ("The VIPs / King Ptolemy") to soft flute-driven pieces ("Only Yesterday"). Some tracks of note include "Caesar's Assassination", "Interlude / Sea Battle", and "Antony…Wait". I found that the score worked wonderfully in the film, but as an album, it's really not the easiest thing to listen to. North was certainly pushing the envelope in terms of what was deemed "appropriate" for film music; his modern approach to percussion and rhythms hadn't really been done (or accepted) before. So while on a technical and artistic level I can appreciate his work, I can't say that this is an album I'm going to just pop in and listen to on a whim.

The music has been painstakingly restored from the original masters, and the sheer magnitude of the amount of music on the two CDs (over 2.5 hours of music) more than makes this album worth getting. It might not get frequent playtime, but North's inventive and progressive epic score is certainly worth taking the time to listen to. I'd even suggest watching the film, which is where the score truly shines. The liner notes on the album are extensive and informative, and kudos should be had by all who had a hand in releasing Cleopatra restored to the masses.