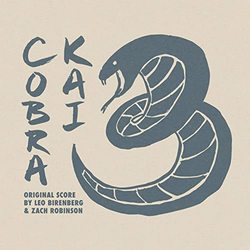 La-La Land Records and Sony Pictures Television proudly present the deluxe 2-CD release of the original score to the third season of Netflix's Original Series Cobra Kai, starring Ralph Macchio and William Zabka. Composers Zach Robinson and Leo Birenberg, once more expand their exciting musical odyssey through the Karate Kid saga, delivering yet another astounding score to the acclaimed third season of the hit phenomenon series, Cobra Kai. The composing duo's music shines brightly yet again, soaring with emotion, heart and thrills! Produced by Zach Robinson and Leo Birenberg, and mastered by Doug Schwartz, this deluxe 2- CD release showcases the third season's exciting musical highlights, and features a bounty of 19 bonus tracks that are exclusive to this CD release and not available on any other format! Art Design is by Dan Goldwasser.