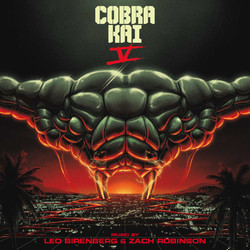 La-La Land Records and Sony Pictures Television proudly present a deluxe 2-CD release of the original score to the fifth season of Netflix's Original Series Cobra Kai, starring Ralph Macchio and William Zabka. Composers Leo Birenberg and Zach Robinson are an indelible part of the Cobra Kai universe and they return in full-force for the stunning all-new fifth season, turning loose yet another astounding musical soundscape for the unstoppable Cobra Kai saga, capturing all the powerhouse action, drama and heart that are the hallmarks of this phenomenal series! Produced by Leo Birenberg and Zach Robinson, and mastered by Reuben Cohen, this deluxe 2-CD release features the fifth season's knockout musical highlights, along with thirteen bonus tracks exclusive to this CD release and not available on any other format! Art Design is by Dan Goldwasser.