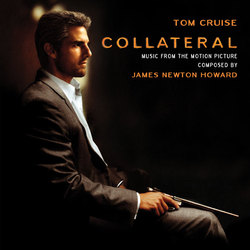 For the 2004 Paramount Pictures Collateral, composer James Newton Howard infused his score with an unusual degree of complexity and architecture. Dark and low-keyed in the first half, edgy and aggressive in the second, Howard adds to the ever-tightening narrative structure of the film by introducing his music in deceptively simple strokes, primarily through lower synthesizer and string colors. As the taut script and pace develop, Howard brings weight to his colors by adding low brass almost imperceptibly. While most of the standard orchestra is present to meld with the electronic keyboards, trumpets are omitted, leaving only French horns and trombones in the brass, adding to the grim texture of the music. Howard's vivid, thundering percussion figures take center stage in a virtuoso display. Howard enlisted a murderer's row of guitar players and "sound conceptualists" to create a riotous palette of guitar timbres and effects to paint with, including veteran session musician Michael Landau, composer Charlie Clouser, Page Hamilton of the band Helmet, and scoring stage regular George Doering.

Howard recorded about 50 minutes of music for the film—but in the end, only 15 minutes were used (eight of which made it onto the original soundtrack album previously released). Intrada brings this entire score to CD for the first time assembled from the the two-track digital session "print" take rolls archived both on disc and tape (DAT), courtesy Paramount Pictures.