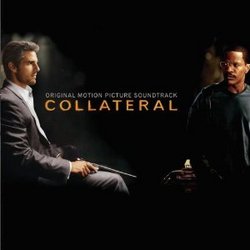 Los Angeles is Michael Mann's town. While Paul Thomas Anderson holds a claim on the Valley, no other filmmaker can make a movie that feels like LA. Neon noir nighttime photography. Desolate urban wasteland. Introspective characters on either sides of the law trying to find connection with those who are their very enemies. You'd know a movie made by Mann immediately.

You'd also know the soundtrack of a Michael Mann movie, regardless of who performs on it. It is in the acute juxtaposition of introspection and intense and mellow moods that singles him out. Mann has always had a love for dominating guitar rhythms, moody hypnotic ambience and ethnic music (depending on where the movie takes place) to create a coherent whole.

Mann uses three composers interchangeably here: James Newton Howard, well known album producer Tom Rothrock and City of God's. Antonio Pinto. Composers have never been known to do their most distinctive work on a Mann album. This album has a lot of similarities with the soundtrack to Heat, though Collateral is much more mainstream than Heat, which emphasized more avant-garde tracks. Howard's music here is good but not as good as his work in The Village. It should be acknowledged though that he's clearly making his music "fit in" with the other styles on display. As a negative, some of his best work isn't included on the album (the cat-and-mouse suspense cues from the third act). Rothrock starts the album perfectly with "Briefcase" but he also has the one glaring out-of-place track, "Rollin' Crumblin'" which plays as a parody of Jan Hammer's work on Mann's own "Miami Vice". Mann is a person that will never completely let go of 80's power chords. Antonio Pinto's two tracks are fantastic and his "Requiem" ends the album on the right ambiguous melancholy note of release. The other tracks here are a wide assortment of Audioslave, The Roots, Paul Oakenfold, Miles Davis and others.

In the movie, the Max the cabbie (Jamie Foxx) is forced on a through-the-rabbit-hole tour of LA by the steely professional hit man Vincent (Tom Cruise). The trip takes them all over the city from downtown to Korea Town to the various Spanish and Korea ghettos. Culturally, the various locales are represented in diverse tracks sprinkled through the album ("Guero Canelo", "Spanish Key", "Destino de Abril"). Musically, the movie plays the two leads in opposition. Max is an introverted, complacent character and mostly represented by mellow groove and blues. Groove Armada's smooth sexy "Hands of Time" and the Klazz Brothers & Cuba Percussion's rendition of "Air" being most representative. Vincent in contrast is harder, represented by driving guitars in "Briefcase", "Shadow on the Sun" and Howard's violently percussive cues ("Max Steals Briefcase, "Vincent Hops Train", "Finale").

This is one well-organized soundtrack. What makes Collateral a great album is the deft balancing of the various styles. The several weaker tracks don't keep it from being a great listening experience. This album is perfect for driving. Especially at night.