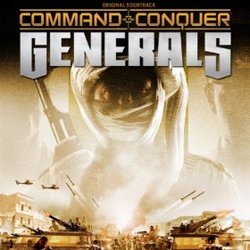 Bill Brown has been at the forefront of video game scores for seven years since Rainbow Six in 1998. Since then, his memorable compositions for multiple Tom Clancy games as well as Lord of the Rings: Battle for Middle Earth and, most recently, the television series "CSI: NY". In 2003, Brown worked with composer Mikael Sandgren (Quake III: Arena) on a game series called Command and Conquer: Generals, the score for which has recently become available for download on iTunes.

Command and Conquer: Generals is a military action game and this is not a new genre for Brown. A large amount of the cues feature a sound he made so popular with the Tom Clancy game series and he probably could have written this score in his sleep. But he didn\'t. There is a second style, which is a harsher electronic feel, similar to Harry Gregson-Williams\' work for Tony Scott\'s films Spy Game and Man on Fire, as well as The Rundown ("Makin\' A Sweep"). The main theme is a rousing brass anthem and is used often, especially toward the beginning of the soundtrack ("Fight for Peace" and "In the Field").

Brown\'s trek across the world for Clancy\'s various games left him with a large arsenal of ethnic music ideas and he uses them to a good effect for Command and Conquer, given the various locations for the game. "Firestorm" is a harsh electric guitar cue with some Asian guitar, gong, and flute influences. "The Sacrifice" pulls a page out of the Gladiator book with some North African-sounding guitar, percussion, and vocals. The final few tracks return to the pure militaristic sound and "Rescue Ops" ends the soundtrack with a reprise of the main theme. There is nothing exceptionally new here for fans of Bill Brown\'s past scores; his work for Rainbow Six, Rogue Spear, and Battle for Middle Earth are better scores. However, this is a solid game score that effectively sets the tone for the game in Brown\'s classic style. It is also great to see this type of soundtrack being picked up by iTunes.

iTunes gives buyers the option of purchasing as much or as little music as they want. Since CDs are still being made, album lengths tend to remain around the hour-long time span. But online exclusive releases no longer have to. The second game in the Command and Conquer: Generals series, Zero Hour, also received a second score by composers Bill Brown and Mikael Sandgren. The album on iTunes is an Extended Play 20-minute release, but of course, the price reflects this - something a short CD might not. So you get what you pay for, in a good way, which is a taste of the new music they wrote for the series, which probably used a bunch of cues from the first. It is a sequel, after all.

The main theme is similar, with the harsh guitars and militaristic percussion. The second track, "Helix Armada" throws some Taiko drums and Asian woodwinds into the mix to make a very unique sounding cue. "GLA Anthem" continues with the same Gregson-Williams thriller sound as the first Command and Conquer: Generals game. The Rainbow Six-like brass theme from Generals finally returns in "Raid in Progress", but in a varied form. This score offers a little more in the realm of the ethnic-influenced action music when added to the first Command and Conquer: Generals score, but little we haven\'t heard already. The nice thing about iTunes is that you can buy choice tracks. From this release, I would highly recommend the "Helix Armada" if you\'re choosing one.