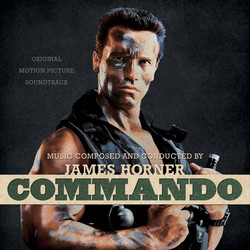 This re-issue is identical to the previously sold-out 2011 La-La Land Release in both packaging and content. (Only variation is "Limited Edition of 2000 Units" is printed on the back cover).

Horner's propulsive orchestral, steel drum-laced score builds on his 48 Hours motifs, resulting in the perfect, high-octane accelerator for Schwarzengger's unstoppable, death-dealing assault. Remastered and expanded with bonus alternate tracks, Commando is back and sounding better than ever. Also featured is the unforgettable end credits rock anthem "Someday, Somehow, Someone's Going To Pay" (AKA "We Fight For Love") performed by The Power Station.