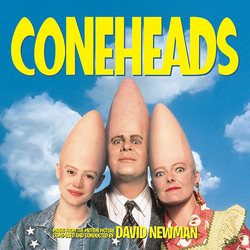 Coneheads / Talent for the Game / The Itsy Bitsy Spider

David Newman was firmly established as one of Hollywood's preeminent composers by the early 1990s, and this album offers a trio of previously unreleased Newman scores: his delightfully retro contribution to the 1993 Paramount comedy Coneheads, a dramatic score from the 1991 baseball drama Talent for the Game, and a wacky underscore for the animated short The Itsy Bitsy Spider (1992). Each offers a taste of Newman's redoubtable talent for composing a perfect score to whatever project came his way.

Highlighted by a playful homage to Bernard Herrmann's The Day the Earth Stood Still written in Newman's signature style, Newman grounds his Coneheads score with the familiar tritone and ostinato from the Herrmann classic, incorporating electronics and eerie sounds that evoke the musical colors of 1950s science fiction. Newman's intermittently ethereal music acts as a perfect counterpoint to the film's slapstick gags.

In Talent for the Game, Newman's lyrical score is certainly one of the film's strongest assets, recalling the melodic grandeur of scores like The Natural, Field of Dreams and even Hoosiers, while also underscoring the rural nature of small-town life and the rise from anonymity to a heavily hyped big-league prospect. Introspective, poignant underscoring is the main ingredient of Newman's work.

Concluding the album is Newman's delightfully frantic score for The Itsy Bitsy Spider, a comedic, revisionist take on the nursery rhyme. The seven-minute animated short, which played in front of Paramount's 1992 feature Bebe's Kids, gave David Newman the opportunity to craft a madcap score in the vein of Carl Stalling's Looney Tunes shorts.

All told, these premiere presentations of three David Newman scores showcase his compositional diversity and make for a colorful, varied listen.