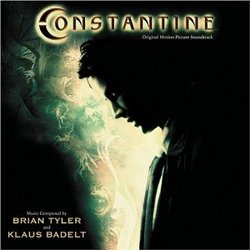 Brian Tyler's style for scoring the dark action/horror genre was unleashed with Darkness Falls in 2003. Tyler's attachment to the "Hellblazer" graphic novel adaptation Constantine was promising, as Tyler has continued to impress over the past two years in nearly every genre he approaches. But Tyler's score was deemed too "dark", and so Klaus Badelt (The Time Machine, Catwoman) was brought on to lighten up some of Tyler's more intense music, with Tyler conducting the final score to the film.

For a film where the main characters travel in and out of Hell, it is hard to think that it was the music that was too dark and had to be changed. Regardless, the final product generally works in the film, but could have benefited from a louder presence toward the end. Tyler's portions of the music that remain have quite an appropriate feel, reminding me of Debney's work for End of Days; the choral piece, "Deo et Patri" is especially good. The main motif for the film is a repeated rising arpeggio that gives some of the slower scenes a good sense of motion ("Into the Light"). Some of the music sounds oddly like Don Davis' otherworldly soundscape for The Matrix ("Flight to Ravenscar").

Similarly, Badelt's contributions work well in the film, and complement Tyler's work without sounding extremely out of place. The primary musical addition is Martin Tillman's eerie electric cello, which provides a perfect feel for the film. This is first introduced in "Meet John Constantine" and is used often throughout the score. In "Ether Surfing" Tillman's cello takes on a very harsh edge, which is an even more unique sound than the electric cello usually makes. These solos alongside Tyler's otherworldly and hellish music combine to make a good accompaniment to Keanu Reeves' portrayal of the tortured soul of John Constantine.