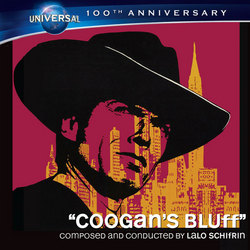 The overall shape of Lalo Schifrin's score to the 1968 Universal Pictures film Coogan's Bluff is one big arch, similar to what takes place on screen. The music encompasses a variety of idioms from western to eastern, journeying through outdoor desert to the urban sprawl of the Big Apple, through jazz-rockfunk and the underground dance scene right into the sixties counterculture replete with tabla and sitar.

Two dynamic vocal numbers, composed and conducted by Schifrin with full big band accompaniment, get prominent main title credit. Like the film, the score ultimately comes down to an exciting chase, with Schifrin bringing his orchestra back in bravura style. Coogan's Bluff proved to be terrific training ground for Clint Eastwood and Lalo Schifrin, whose Dirty Harry series was on the horizon a few years down the line.

For this album, Intrada was given access to the complete, original 1/2" three-channel stereo scoring session masters, housed in the Universal Pictures vaults in mint condition.