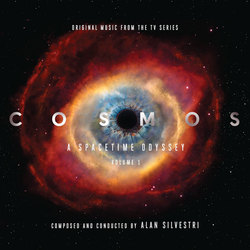 Intrada presents the first of four volumes of music from the Cosmos: A SpaceTime Odyssey, with Dr. Neil deGrasse Tyson taking over as host in this 2014 continuation of the series Carl Sagan produced in 1980. Featuring all-new state-of-the-art CGI, animation and a wealth of cutting-edge scientific fact, the new Cosmos takes the viewer on a journey through space and time, often presenting breathtaking visuals to enhance amazing facts about the origin and wonders of how the world came to be and why.

To support this stunning voyage, Alan Silvestri was hired to compose a large-scale symphonic score to capture and unify the different stories in each episode. This wealth of music is presented across four volumes, the first of which Intrada presents today. The album, produced by the composer, includes bonus tracks not previously released, including an alternate main title. The score is rich and full of wonder, often reminiscent of previous Silvestri scores such as Contact and even parts of Judge Dredd.