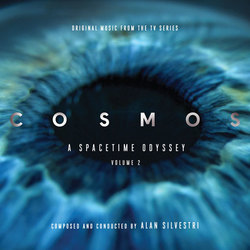 In this second volume of music Cosmos: A SpaceTime Odyssey, composer Alan Silvestri continues to develop his musical universe laid out in the second episode. This part focuses on the relationships between all living things, showcasing artificial selection, including how every breed of dog evolved at the hand of man and how natural selection sculpted, imperfectly, the human eye. With Dr. Neil deGrasse Tyson as a compelling host, this journey into the often microscopically small continues with the state-of-the-art CGI, animation and wealth of cutting-edge scientific fact.

As with the first part, Silvestri's music is gloriously symphonic, although more focused on rhythms that enhance the scientific universe described in this part. Intrada presents this second visit to the Cosmos universe, produced by the composer, including additional bonus tracks not previously released. Inside the colorful packaging are a few words from Dr. Tyson and this release is the next step in our four volume journey through Silvestri's musical odyssey.