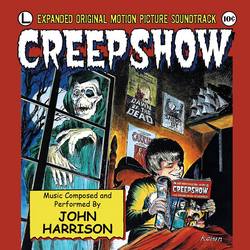 One of La-La Land Records best-selling soundtracks (long out of print) gets a new and improved version for the Collector's Marketplace—John Harrison's score to George A. Romero's horror classic Creepshow.

This new edition includes the original score completely remastered, resequenced in film order and remixed—supervised by composer John Harrison—from the original 24 tracks. As an added bonus, we have licensed several of the library cues fans have been dying to hear since the film came out in 1983! Clocking in at over 76 minutes, this Limited Edition soundtrack is filled with some of the most iconic horror music to ever grace the Silver Screen. New liner notes by Jeff Bond, as well as new essays by George A. Romero and John Harrison fill out the 24 page booklet design by art director Mark Banning.