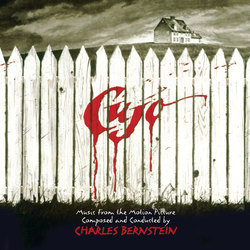 Charles Bernstein's score to the 1983 film Cujo takes a lyrical approach, drawing on the intimacy of piano and winds or using a lush orchestra to create a sympathetic portrait of the Trenton family and their seaside town. But for all of the bucolic warmth that Bernstein's melodies conjure, something is amiss. Bernstein links the unhappy lives of the Trentons and Cujo's far less well-off owners, the Cambers. Percussion often echoes without resolve, adding to the melancholy that hangs over Cujo well before its terror begins.

Cujo helped make Charles Bernstein one of Hollywood's most striking names for musical terror during the '80s. Among his genre scores, Cujo remains a breed apart for its emphasis on the human condition above all.

This premiere presentation of the score on CD includes the cues as Bernstein originally composed and recorded them, in their two-track stereo mixes made by Robert Fernandez at The Burbank Studios in May 1983.