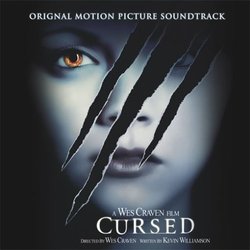 The Cursed soundtrack opens with Bowling for Soup howling like a wolf in "Lil Red Riding Hood". I suppose it is as appropriate as one can get for a various artists soundtrack compilation, given the film's nature. Most of the other songs on this album are unrelated (or very loosely related) to the film's plot and are given a place as special "remixes", which make it a rock album with a largely "dance" feel. The thing with these sorts of soundtracks is that one's enjoyment of it will depend wholly on the musical interests of the listener. For fans of new rock, it might be a decent compilation. Otherwise, avoid it unless you're desperate to get the 5-minute suite of Marco Beltrami's score. The album does feature some larger names in the rock scene today, such as Dashboard Confessional and Collective Soul.

One of the better songs also appeared on the Punisher soundtrack last year. Steve Wiser's (or 7 Wiser) "Sick" is one of the songs that actually seems to fit the feel of the film. The other highlight of the album is "After All" by Delerium featuring Jael of Lunix. Beltrami's cue is a bit of dark action music with shrill shrieks and creepy effects, but is not worth the price of the disc itself. The last minute breaks into some nice orchestral music, but it's a bit too little, too late.