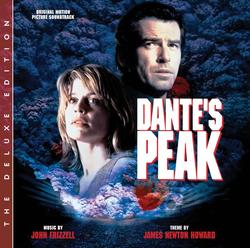 he 1990s saw a revival of the Hollywood disaster epic, with two large-budget volcano films competing in early 1997 - and both Dante's Peak and Volcano had their soundtracks released by VarĶse Sarabande. Following the Deluxe Edition of Volcano in 2020, this 2CD set of Dante's Peak expands its massive John Frizzell score - with themes by James Newton Howard - in a triumph of explosive, symphonic '90s action.

Dante's Peak was directed by Roger Donaldson and starred Pierce Brosnan and Linda Hamilton in escaping a Mount St. Helens-type blast in Washington State. James Newton Howard was initially hired to compose the score, but left due to scheduling. Howard contributed two main themes, for the volcano and the film's romantic relationship, and recommended John Frizzell for the score (as the two had done on The Rich Man's Wife).

Working at a furious pace, Frizzell composed a massive, symphonic score befitting the life-or-death struggle of outrunning a catastrophic volcano—but also containing moments of grandeur, suspense and softer contemplation. "I'm very structural," Frizzell told Tim Greiving, interviewed jointly with Donaldson for the new liner notes. "So I actually drew maps of the film, placing James' themes in key moments and trying to break down structurally how I wanted to have a roadmap—knowing how much tension I needed to have and where I could hit the throttle."

VarĶse Sarabande's Deluxe Edition of Dante's Peak features the 93-minute score across disc one and two, with the 1997 half-hour album at the end of disc two.