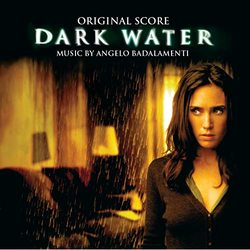 Suspense scores are always difficult to evaluate as a soundtrack because their primary and, dare I say, only function is to contribute to the picture without drawing attention to themselves. Taken apart from the movie, these gloomy concoctions of minor key chords and hesitant piano figures, more often than not played lento, are rarely worthy of anyone\'s undivided attention. A few suspense/horror scores of late have proven to be cohesive and distinctive enough to warrant repeat listens. Alejandro Amenábar\'s The Others might have raised the bar a little and James Newton Howard\'s The Sixth Sense and Signs certainly qualify as intricately laced suspense works making use of subtle themes and interesting progressions, music which can be appreciated outside of the scenes it accompanies.

Angelo Badalamenti\'s work on Dark Water sadly does not hold to this kind of scrutiny and falls short of interest. We\'ve heard this approach before in countless movies and it has been done better at least a dozen times. Dynamically, the sonic field is flat and slow and unchanging, which makes for a pretty boring 42 minutes. Badalamenti\'s signature sound here, a mix of eerie synth glass harmonicas and echoing piano lines, evokes Carpenter, but it\'s tired and yawn inducing. The orchestral hits, the few that have been sprinkled here and there, are likewise run-of-the-mill and not scary in the least bit. A film music undergrad could have innovated and done a better job. The only saving grace here is a family theme of sorts, a rapid run up the scale performed on strings, which plays during "The Tram (Main Title)", "Final Elevator", and "End Credits" and which attempts, albeit poorly, to pull the score together and to give it some semblance of a personality.

Brian Tyler has done much better suspense and horror music than this, crafting new combinations of sound and distorting expectations. James Newton Howard has proven that one can take minimalist themes and combine them in a creepy orchestral atmosphere, tugging at the listener and playing a sort of aural tension-and-release game. And, obviously, one cannot ignore Hans Zimmer\'s beautifully restrained work for The Ring, a movie with obvious stylistic and literary ties to Dark Water. Simple melodies and layered, driving celli and basses ostinati gave that score a personality. Angelo Badalamenti\'s Dark Water is much murkier. Its percussion frenzy in "Ceci Wanders" is not enough; it lacks innovation and personal touches. It meanders and convolutes until it gets lost and can\'t be pulled back together for a decent finale.

More and more film soundtrack releases are making their way into the hands of hungry consumers, it would seem, but good work still goes unreleased. It\'s sad to realize that someone, somewhere, chose to release this score instead of another, better one. Dark Water isn\'t bad; it\'s just mind-numbingly average.