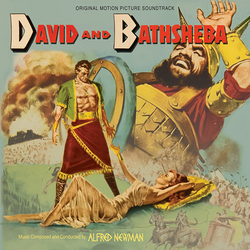 Kritzerland is pleased to present for the first time complete and in stereo, a new limited edition soundtrack release: David and Bathsheba.

Alfred Newman took more than forty-five studio hours, spread over thirteen days (mostly between late April and late May 1951), to record the entire score. The orchestra at its height contained sixty-eight players. And what he delivered was one of his all-time masterpieces, filled with melody, memorable themes, drama, pageantry, and emotion.

The Hollywood Reporter noted that "Alfred Newman's score develops in intensity in the same fashion as the story, rising to powerful crescendos that sweep the action to its conclusion." Among Alfred Newman's many scores for religious pictures—including The Song of Bernadette and The Robe—the music of David and Bathsheba ranks as one of his finest.

David and Bathsheba was previously released on CD by Intrada, running a bit over fifty-five minutes and from the then available best sources, which were optical mono tracks mixed in with transcription discs. They did include one tantalizing stereo track at the end of their presentation and their CD sold out in just a few months.

But sometimes miracles happen and the complete tracks, in stereo, were found in a vault they should not have been in—they were mis-labeled. Those tracks, in superb condition, were lovingly transferred and aligned resulting in a breathtaking stereo presentation, perhaps one of the best-sounding recordings of any score of this vintage. It is, in a word, spectacular.

For fans of biblical film music, music of the Golden Age of film scoring, and one of the greatest film composers of all time, the CD is a must. David and Bathsheba is limited to 1,500 copies only.