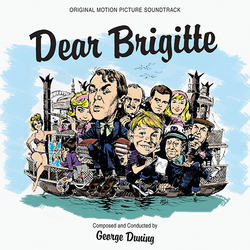 Dear Brigitte has a score that is as delightful as the movie it accompanies, aiding immeasurably in making the film so entertaining.

George Duning's music was always tuneful, always served the films beautifully, and his comedy scores especially were models of what great comedy scores should be and Dear Brigitte is one of his most charming. Right from the main title, with xylophone and banjo leading the way to a classic Duning theme (a three-note motif—many composers like to do this—it's literally the syllables of the title set to music), you know you're in good hands. The score is fun, frothy, and classic Duning.

Mr. Hobbs Takes a Vacation was a huge hit and is as delightful today as it was then. Once again, it's a perfect match between film and composer, in this case, Henry Mancini.

In 1962, Mancini would write four great scores in a row for four different studios—Experiment in Terror, Hatari, Days of Wine and Roses, and Mr. Hobbs Takes a Vacation. Each score is completely different and each brilliant in its own way. Mr. Hobbs is the lightest of them—a wonderful compendium of classic Mancini music, from the delightful main theme (in its many guises), to Mancini's usual great source music tracks, to his deft way with underscoring both comedy and scenes of emotion. As with most Mancini scores of this vintage, there is a surprising amount of dramatic scoring that works beautifully in the film.

Dear Brigitte is making its debut on CD. The tapes were mostly in good shape, but a handful of tracks were beyond repair, so badly damaged that there was no way to include them. Thankfully, thematically all that material is covered in other tracks. We've done our best to minimize the wow and flutter present on a couple of tracks, but most of it sounds pretty great in stereo.

Mr. Hobbs Takes a Vacation was previously released by Intrada—it sold out and hasn't been available for years now. The Intrada presentation put all the tracks in strict film order, but because there were quite a few source music tracks in a row, we felt that interrupted the actual score too much, so we've switched it up a bit and moved some of the source music cues to the bonus track section. Again, there is a bit of wow and flutter here and there, but we've remastered the sound, cleaned up some little sound problems from the previous release, and put a few of the really short tracks together, which, for us, makes for a more seamless listening experience.

Any way you listen to it, Dear Brigitte and Mr. Hobbs Takes a Vacation are smilers—music that just makes you smile, makes you happy, music filled with memorable melodies in a delightful variety of guises and settings, by two great film composers—Henry Mancini and George Duning.

Dear Brigitte / Mr. Hobbs Takes a Vacation is limited to 1000 copies only.