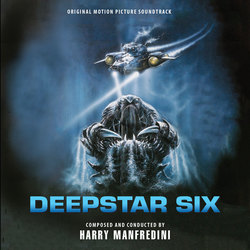 Intrada's latest release is a reissue of Harry Manfredini's exciting and evocative score for the 1989 under-water horror film DeepStar Six. First issued at the time of the film's release, it proved to be one of Manfredini's most popular works. Although best known for his highly creative and scary scores to the Friday the 13th franchise, DeepStar Six afforded the composer the opportunity to use the resources of a large orchestra for this thrilling ride. The result is a large-scale score featuring music that captures both the mystical beauty and mystery of the ocean and the horrors hidden deep below. Running nearly 70 minutes, and a bit longer than the amount of music in the film, it is an epic listening experience.

This new release features revised packaging with new liner notes and remastered sound. The album will also be available digitally in hi-res.

The film was directed by Friday the 13th veteran Sean S. Cunningham and takes place in the near future, where a Navy-sponsored team unleashes an insect-like beast when trying to turn its sea cave into a missile silo. The beast first terrorizes the team outside their underwater station, but soon finds its way on board, unleashing terror as the team races against the clock to escape both the beast and the compromised deep-sea station. The other race against the clock was getting the film out before competing underwater adventures produced that same year were released. Producer Mario Kassar accomplished his mission of having DeepStar Six out first before Leviathan and The Abyss when the film opened on Friday, January 13, 1989.