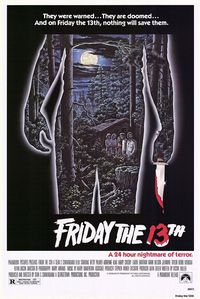 Everyone knows of the hockey-mask wearing, butcher-knife wielding killer Jason Vorhees - he\'s been made famous through the Friday the 13th series of horror slasher films over the past three decades.  But when you go back to the original 1980 Friday the 13th, you realize that it has very little to do with Jason, and the fear is presented superbly through the use of first-person perspective.  It\'s not until the end, when we find out who the killer is, that it all starts to pull the mythology of Jason together.

In 1958, two camp counselors were murdered at Camp Crystal Lake, and the place was shut down.  Now (20 years later) the camp is being re-opened, and the young camp counselors are busy refurbishing and preparing the cabins - but they\'re not alone, and are being picked off one by one.  Directed by Sean S. Cunningham, who wanted to capitalize off the success of John Carpenter\'s Halloween, and written by Victor Miller, the film was a totally low budget effort, but was a box office success with its blend of horror and humor - and it spawned ten sequels, a cross-over film, and a remake which is coming out this year.  The film set the standard for many of the horror movie clichés that we are familiar with, but still manages to be fresh with a few twists and turns that hold up even on multiple viewings.

Now approaching 30 years since Camp Crystal Lake was terrorized, Friday the 13th has been given a whole new transfer for Blu-ray and "Special Edition DVD", and looks very good.  It\'s not a perfect transfer - it\'s grainy and dark - but given the shoestring budget that they had to make the film, it is likely the best the film has ever looked.  The daytime scenes look better than the nighttime scenes, which suffer from a slightly overeager black crush that loses some of the detail.  Over all though, it\'s a solid looking film.  Obviously given the low budget, the original audio track was in mono - and that is presented here on the disc, as well as a much nicer English 5.1 Dolby TrueHD audio track.  Still rather front-heavy, the element that benefits the best from this new surround track is Harry Manfredini\'s iconic musical score, which sounds full and vibrant - and still quite effectively creepy.  The rest of the audio elements are showing their age, however, with somewhat limited fidelity - but I\'d pick the 5.1 track over the original mono.

Released as the "uncut" version of the film (containing a few extra seconds of violence), Friday the 13th arrives on Blu-ray with a spattering (pun intended) of special features.  First and foremost is a rather hearty and information-filled commentary track hosted by Friday the 13th expert and author Peter Bracke (also of High-Def Digest), which contains director Cunningham, writer Miller, as well as a few of the actors and other crew members. Definitely check this commentary out - I learned quite a lot about the behind-the-scenes of the film.

"Friday the 13th Reunion" (17-minutes, HD) is a recent (September 2008) roundtable discussion with make-up artist Tom Savini, actor Ari Lehman (Jason), creator Victor Miller, actress Betsy Palmer (Mrs. Vorhees), composer Harry Manfredini, and actress Adrienne King (Alice).  They talk about casting, shooting, music, effects, and more - a lot of information is repeated from the commentary and other featurettes, but it\'s a nice re-visit and the participants are more candid than in the usual EPK fare.  "Fresh Cuts: New Tales from Friday the 13th" (14-minutes, HD) brings us additional behind-the-scenes recollections and stories from the same participants.

"The Man Behind the Legacy: Sean S. Cunningham" (9-minutes, HD) is a candid interview with Cunningham, who only directed the first film and actually had no desire for there to be any sequels.  It\'s interesting and gives you a bit of insight into his mind and working process.  The rather odd short film, "Lost Tales from Camp Blood - Part 1" (7.5-minutes, HD) involves Jason stalking and killing a couple. I don\'t really understand the purpose of its inclusion on the disc, nor do I look forward to "Lost Tales from Camp Blood - Part 2" - wherever it might be found.  "The Friday the 13th Chronicles" (20-minutes, SD) is an older behind-the-scenes making-of piece, with further recollections.  Make-up master Tom Savini is profiled in "Secrets Galore Behind the Gore" (9.5-minutes, SD) and while his effects might seem basic by today\'s standards, they were groundbreaking at the time, and it\'s nice to have a discussion about the approaches they took to bring the horrible deaths to the screen. Finally, a theatrical trailer (2.5-minutes, HD) is included.

Friday the 13th can rightfully be considered a genre-sparking horror "classic", setting the trend for many of the films to follow.  It\'s an enjoyable film, and has been given a solid presentation on Blu-ray.  The extras are mainly talking-heads, but there\'s a lot of great stories recounted, and it makes the disc worth picking up.