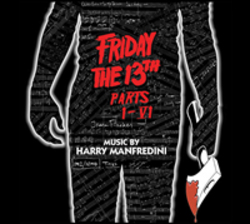 This comprehensive box set showcases some of the most chilling, daring and skillfully orchestrated film music ever composed for the genre. The remastered scores for the first six Friday the 13th films are presented here—featuring more than 5 full hours of music, much of it previously not available in any official format and most of it exclusive to this special release.

Also included: a 40-Page booklet, packed with exclusive liner notes by film music writer Brian Satterwhite that drag you deeper into the music of Camp Crystal Lake and the composer who empowered the unstoppable horror that dwells there, Jason Voorhees. Both the booklet and the six CDs are housed in a frightfully attractive hard-cover slipcase.

ABOUT THIS RELEASE: Elements once thought lost were located at Paramount Pictures and at the composer's home. Parts 1-5 were pulled from Paramount's original music stems, assembled by Neil S Bulk and mastered by James Nelson under composer Harry Manfredini's supervision. Part 6 will sound the best of all. Luckily, those original tapes were still in the composer's possession. He and James Nelson remixed and mastered directly from his original source.

For those of you wondering about Parts 3 and 4, we decided the best representation of these scores is to include ALL the music featured in both films, including those cues recycled from Parts 1 and 2. The original music editor did such a great job stitching together all these tiny cues into longer cues that he essentially created an entirely NEW score for these films.