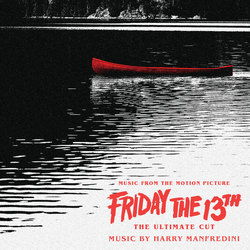 Friday the 13th: The Ultimate Cut - Remixed and Remastered

Over 40 years ago, acclaimed composer Harry Manfredini unleashed one of cinema's most iconic horror genre scores upon the world. Now, the score from Crystal Lake returns—bolder, more immersive, and more chilling than before! Friday the 13th: The Ultimate Cut presents Manfredini's masterwork restored, remixed and remastered in stereo, with the composer's approval, from newly discovered original multitrack recordings in the Paramount Pictures' vaults. Also included are NEVER-before-heard-or-released music cues that were not used in the film!

Produced by Dan Goldwasser and Brian Satterwhite, mixed by Jerry Lambert, and mastered by James Nelson, this special CD release features exclusive liner notes by Satterwhite that provide a detailed track-by-track breakdown along with an in-depth examination of the release's restoration and remix process. The art direction is by Goldwasser and the original cover art is by Scott Saslow.