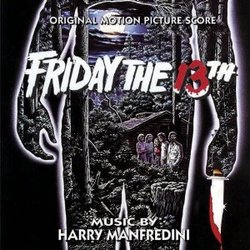 Acclaimed composer Harry Manfredini fashions some of the most chilling, daring and skillfully orchestrated music ever composed for the horror genre. These are the original orchestral tracks from the film—the music that launched a horror icon, Jason Voorhees, from the depths of Crystal Lake.

Produced by Harry Manfredini, Neil S. Bulk and MV Gerhard and mastered by James Nelson, this is a must-have for any horror genre and movie music fan! Liner notes by Brian Satterwhite (abridged from the Friday box set).

This is the same master and track assembly as the first disc in our sold-out Friday box set. This will be the only Friday the 13th score released independently of that set.