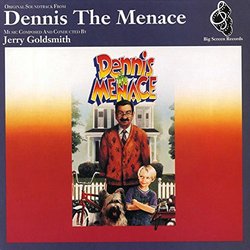 The Dennis the Menace theme may be one of my favorites of Jerry Goldsmith\'s. Not a popular choice I know. In opening seconds of "Main Title", a two note burst of the orchestra counterpoints with a southern harmonica. It\'s an exciting opening that catches attention. Like a rambunctious kid on the sugar high, the theme moves relentless. It is an exciting syncopated piece. The horns and xylophone declare the theme and the strings echo back. Each repetition of the theme is unpredictably different in ornamentation, the trumpets may take over and xylophone may then join the strings. This exciting 3-minute track is so packed with changes in structure that it deserves to be on a best-of album.

This is very much a playful comedy piece for Goldsmith. You can see many similarities with his Joe Dante style (Gremlins films, Burbs, Matinee, Looney Tunes: Back in Action). What makes this album different is that the music optimistic and sincere with no irony. Goldsmith as a composer doesn\'t usually write young themes. He\'ll write innocent and pure themes (Carol Anne in Poltergeist) or sarcastic playful themes (most of his Joe Dante work).

In all fairness, the score as a whole is not one of Jerry Goldsmith\'s better works. Many would consider it average at best, but I feel it is very representative of the last fifteen years of his career. Goldsmith never slacked off, regardless the film he was writing for. His genius has always been theme and instrumentation. However, the emotional development of his themes was never his strong suit in the 90\'s and 00\'s . There\'s little growth between the first use and final use of his motifs, only modulations in intensity or rhythm. That said, if he gets a good theme it can carry half of the score.

And it is a great theme. While the movie is clearly a Home Alone clone, Goldsmith uses it as an excuse to riff on Sergei Prokofiev\'s "Peter and The Wolf." He divides the thematic focus on Dennis\' mischievous light antics and hobo nemesis Sam\'s comic villainous low horns much like the Peter and the Wolf themes. And if the similarities weren\'t obvious enough, Goldsmith\'s even directly quotes the Wolf\'s French horn motif in "Bed Time." The more gentle and emotional sections are routine (" Real Love", parts of "Beans") but like I said, if Goldsmith has some solid themes and he can goes to town on them.

The album is out of print currently, but is available used in many places. It\'s worth the find for a Jerry Goldsmith fan. It\'s a sunny smile of a score and fun listen.