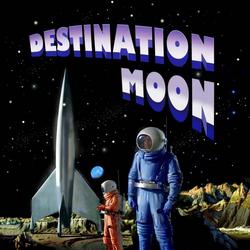 Destination Moon is the first complete release of Leith Stevens' classic 1950 soundtrack. Simply one of the greatest outer space scores, these original soundtrack recordings have never been released on CD.

The spectacular score totals over 56 minutes, a half-hour more than was released on ten-inch album over 60 years ago! From the composer's original acetate recordings, this CD includes every drop of Stevens' music, including some that was edited from the movie.