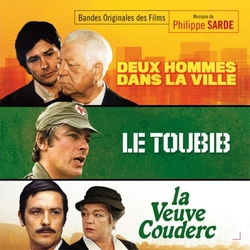 Deux hommes dans la ville tells the story of a former bank robber (Alain Delon), after his release from prison, finds a new love and honest work with the help of his probation officer (Jean Gabin). But when a vengeful cop (Michel Bouquet) begins to stalk him, his determination to a straight life is pushed to the breaking point. The film, written and directed by José Giovanni, is a political drama documenting the social unrest associated with the death penalty. Philippe Sarde composed a very elegiac score with one of his most heartbreaking and beautiful melodies.

Philippe Sarde established a long partnership with director Pierre Granier-Deferre over twenty-five years and seventeen films. Adapted from Georges Simenon's novel, La Veuve Couderc is a finely realistic and naturalistic drama set in rural France in 1934, also starring Simone Signoret and Ottavia Piccolo. Le Toubib is set during the Third World War, in a medical unit lost in an unidentified part of the world, where a surgeon falls in love with an idealistic nurse (Véronique Jannot). For both films, Philippe Sarde delivered lyrical and nostalgic scores displaying his incredible melodic talent.

The program has been assembled, produced and supervised by Philippe Sarde and Dominique Spagnolo. This present edition has been fully remastered from complete scoring session elements. The package includes a 12-page booklet featuring exclusive liner notes by writer Gérard Dastugue and new comments by Philippe Sarde on his collaboration with Alain Delon.