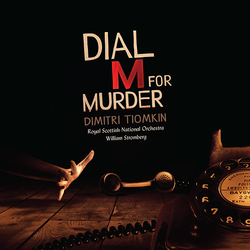 In the fall of 2018, Intrada launched its first Kickstarter campaign in the hopes of finding a new model in which to support the Rolls Royce of film music releases – the complete restoration and recording of a classic film score. Intrada selected a popular and well-respected Alfred Hitchcock film for this foray into crowd sourcing, the 1954 Warner Bros. film Dial M for Murder. After months of intricate restoration work by Anna Stromberg, the production team congregated in Glasgow in the brand new recording studio of the Royal Scottish National Orchestra. The excellent orchestra was up to the challenge of composer Dimitri Tiomkin's challenging notes, and conductor William Stromberg deftly channeled the style of the composer, bringing to life what the original sessions recording must have been like.

Since the story is essentially a one-room drama, Tiomkin's score provided some scope while underlining the tension as Margot Wendice's (Grace Kelly) life falls apart when first she is the victim of attempted murder and then framed for murder when the murder goes awry and the murderer becomes the victim. All so that Ray Milland's greedy, slithery Tony could inherit Margo's wealth and assuage his jealousy of Margot's friendship/romance with Robert Cummings' Mark Halliday. At one point Tiomkin's music evokes the sense of a great ticking clock during the murder sequence, not unlike his High Noon clock device.

With Simon Rhodes behind the console to record and mix the recording, this new recording of Dial M is perhaps one of the finest recordings in the Intrada Excalibur Collection. Included on this new album is music never heard before, including music that was dialed out of the finished film, an alternate intermission card, the original main title, and "Dial M for Me," an arrangement of the film's love theme in a lush, big band style.

For those who supported the Kickstarter campaign to bring this project to life, Intrada is extremely grateful. Special thanks to Pat Russ and Olivia Tiomkin for their gracious support and attending the sessions. Since the original soundtrack recording is long lost, Intrada along with its supporters has brought Tiomkin's passionate and tense score back to life for generations to come to study and enjoy.