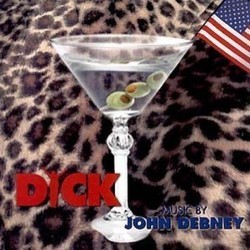 John Debney's score to Dick, the satirical look at the Watergate scandal, was one of those scores that I didn't notice too much while watching the movie, but I knew it was there lending atmosphere and emotion to the film. Upon listening to the promo release of Debney's score, I realized how much of an impact this score made on the film.

While the original soundtrack album was entirely comprised of songs from the film (which was a great album in itself), it was missing the original score that Debney had written. This promo provides us with 26 minutes of music that can be best described as smooth peppy lounge music. From the sneaky rhythm and strings in the opening track "Watergate Break-In", to the Swingle Singer-esque "Skipping Through Town", Debney has perfectly captured the light mood and humor from the film.

Debney has said that he was inspired by the 1960's and 70's spy films, such as The Pink Panther, The Man from UNCLE, Peter Gunn, and others. As such much of the jazz in this score has a European, almost Mancini-esque quality to it. In "Dreams of Dick", Debney uses a lone female vocalist in a Siren-esque way to highlight the very funny dream sequence in the film. There is a track, appropriately titled "Breezy Day" which has such a light smooth jazzy piano and strings, that you could almost picture the perfect day while listening to it.

The scene in the film where Arlene (Michelle Williams) sings "I Honestly Love You" (the Olivia Newton-John song) into Nixon's tape recorder (explaining the 18.5 minutes missing from the Watergate Tapes) is delightfully included on this album, as Debney provided the underscore for the performance. The "High School Marching Band" track is just that – the loud marching music which in the film helped to set up a very funny joke The light jazz makes an exit for "Arlene is Heartbroken", a melancholy piece of music which underscores Arlene's sadness as she realizes that Nixon isn't the man she thought he was. The album ends with "Skipping Reprise", in which the overly-cheery vocalists make a final appearance, and provide a delightful bookend to this deliciously enjoyable album, which runs approximately 26 minutes.