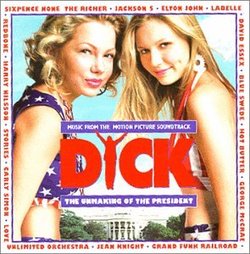 This is one of those films, by title alone, that is kind hard to discuss with just anyone. I got to see this in the town where all of Watergate took place, Washington, D.C., and granted it helped the movie along during its dead points. Granted, ever since the trailer showed up in another anticipated movie of the summer, Election, I've kind of had it in to see it as soon as it was released. I went in with high hopes of a good jab at the Nixon presidency, which hasn't seen too much really dished up about it lately.

Dick doesn't provide any good belly laughs the way Austin Powers II attempted to do and South Park eventually succeeded, but some of the altered historical points and the caricatures keep the movie fresh. Dan Hedaya's Nixon is somewhat better and more to the point than Sir Anthony Hopkins' rendition, adding the extra level of paranoia and bizarreness that most Americans in the early 70s were convinced Nixon had. This is a kinder rendition as well, less sour and abrasive, but still able to jab at the stereotypes in all the right ways. It's also a period piece, a snapshot in miniature of the early 1970s, and the song-track from Virgin does this time-setting some justice. Granted it doesn't contain any score from the busy-of-late John Debney, but I believe it's one of the few things that the under 30 crowd could relate to in this film (the actual noticeable score pieces total about 15 minutes).

It's a bizarre mix of 1970s standards, and upon checking copyright dates, most of the album was written "after" the period represented in the film (but then again, Checkers the dog wasn't supposed to be around either). I do believe that the one true justice done with the music supervision is the inclusion of Carly Simon's "You're So Vain" during the end sequence, summing up the self-serving means-to-and-end that the Watergate scandal was started over. I'm sure in another 20 or so years, or when Hollywood runs out of ideas (the latter most likely being the sooner) we'll see a similar film over Monica-gate with maybe Right-Said-Fred's "I'm Too Sexy" providing the same comic relief.