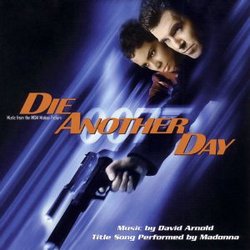 Just in time for his 40th Anniversary comes the latest James Bond adventure, Die Another Day.  Pierce Brosnan is back for his 4th time as the world's most famous secret agent, and this time he's up against a North Korean who wants to take over the world with his super-weapon that harnesses the sun's energy.  This time, though, Bond isn't alone - he's got NSA operative Jinx (Halle Berry) working with him, and in the most expensive Bond film made, the explosions keep on coming - both on the screen, and under the sheets.  Returning for his third film, composer David Arnold graces the sonic landscape with his unique mixture of traditional John Barry inspired orchestrations with modern techno rhythms.

In the pre-title sequence, "On The Beach", Arnold doesn't disappoint.  The electronic textures nicely complement the orchestra, and as the score progresses, Arnold gets a chance to even bring in some of the smaller motifs he introduced to us in Tomorrow Never Dies and The World is Not Enough.  It's exciting to note that he even used the bass line from On Her Majesty's Secret Service throughout this score.  To further the John Barry influences, Arnold used a large choir as well, notably in "Icarus" and "Antonov".  It helps add epic scale and size to the already big action going on screen.

The softer dramatic bits ("Jinx & James", "Going Down Together") are sweeping in the truest Barry style, and pay homage to You Only Live Twice.  Toss in a bit of Latin music in "Welcome To Cuba", and you have quite a bit of variety on this album.  While there is about 45-minutes of score on the album, there is plenty still missing.  Nonetheless, it's a very satisfying listen.

Also on the album is the new main title song, "Die Another Day" performed by Madonna.  This is a rather touchy subject but here goes: it's a pretty decent song, and has grown on me as I listen to it more and more.  But it's not a very good Bond song.  So, while I can enjoy the song, I still feel it's one of the weaker songs in recent memory.  A true shame David Arnold didn't get to write one for this film.  Also included is the new "Bond vs. Oakenfold" track, basically Paul Oakenfold's take on the Bond theme.  It's a pretty decent track, and with the exception of the Mission: Impossible-inspired opening, fills in nicely as an update to the Moby version a few years back.

If you're a Bond fan, you'll do well to pick this one up.  If you're not too keen on the Madonna song, just skip it - the rest of the disc is sure to please.