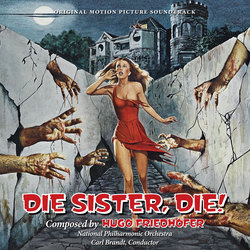 In 1976, composer Hugo Friedhofer took on the scoring assignment for The Companion, what would be his last big screen assignment. It was a horrifying tale of family greed, jealousy and murder that ultimately became known as Die Sister, Die! The film gave Friedhofer ample room to display his seldom-heard gift for writing with a brittle, challenging harmonic vernacular.

Using an orchestra of strings, woodwinds, a modest contingent of brass, xylophone, vibraphone, glockenspiel, bell tree, harp, piano and a small percussion section, Friedhofer delivered the requisite shudders and thrills. Even amidst all of the contemporary ideas for strings and the significant number of transparent woodwind solos, Friedhofer's signature Americana harmonies found their way into the score. The resulting score is a rich meld of classic Friedhofer with an all-new voice.

To present this world premiere stereo release of Hugo Friedhofer's masterful score for Die Sister, Die!, Intrada was fortunate to have access to the original scoring session mixes made by ace scoring mixer John Richards at The Music Centre on 1/2″ three-channel stereo tape. These had been preserved in flawless condition by Michael Lonzo, the director of cinematography for the picture in 1976. The genuine stereo image is crisp and clear with considerable detail.