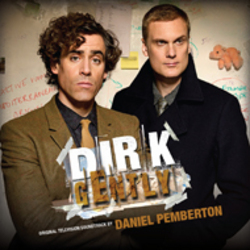 Daniel Pemberton is one of the most inventive and in-demand composers of television music in the UK, with two Royal Television Society Award nominations under his belt (for Occupation and Desperate Romantics). His music for BBC Four's drama series based on Douglas Adams' cult classic Dirk Gently's Holistic Detective Agency showcases Pemberton's instantly catchy style: a score driven by a retro feel channeled through infectious harpsichord riffs and cimbalom melodies over a pop combo beat—as lifted right out of a 1960s detective TV show.

Daniel Pemberton's score is an ode to UK TV legends such as John Barry, Laurie Johnson and Roy Budd, but with a modern twist and it also features other quirky elements such as Wendy Carlos-inspired lo-fi electronica!

The series pilot attracted 1.1 million viewers when broadcast in December 2010.