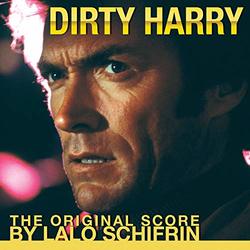 Lalo Schifrin is one of the many foreign talents who has helped shape the action movie, that fundamentally American genre. Raised in Buenos Aires by an Argentine concertmaster, Schifrin, a jazz enthusiast, came to the U.S., where he worked as an arranger for Dizzy Gillespie and others, before becoming one of Hollywood's most sought-after composers. But it would be Don Siegel's 1971 hit Dirty Harry that provided Schifrin with a chance to help pioneer a new movie genre. That effort has been masterfully preserved and presented by Schifrin, Nick Redman, and Michael Matessino.

Selections from Schifrin's Dirty Harry scores (he composed the music for all but one of the films) have been available on compilations, but this release from Schifrin's own label, Aleph Records, marks the first comprehensive soundtrack album for Dirty Harry. According to Redman and Matessino, the tracks they found in the Warner Bros. vaults were among the most discrete they had ever worked with. The result is another sterling example of what seems to be Redman and Matessino's ethic: restoring and/or mixing a score to the best possible sound quality, but without sacrificing any of the music's original aesthetics to suit more contemporary tastes. Now, the duo applies the approach that greatly benefited the melodic, orchestral pomp of John Williams's Superman and Star Wars scores and others, to the more modern - and minimalist - Dirty Harry.

In this era in which California's governor is the Last Action Hero and NBC's latest charge into "reality" programming is Joel Silver's "Next Action Star", here is a truism about action movies you don't hear much: as much as they love their heroes, equally important is how much they hate their villains. It makes sense, then, that Schifrin's score is obsessed with Scorpio, the film's sniper-rapist-extortionist who is also the quarry for Clint Eastwood's iconic San Francisco police Inspector Harry Callahan—or, if not obsessed, then at least singularly devoted to him. It is Scorpio, a killer so animalistic that he is like an id made animate, who drives what main theme the score could be said to have. Its strongest statement includes singer Sally Stevens's ethereal, breathy vocal, which in the film highlights the creepy linkage of sexual aberration and blonde-haired, blue-eyed innocence that Andy Robinson's Scorpio embodies. The Scorpio-driven music anchors the album, which features 22 cues (the last four of which are bonus tracks). Surrounding this material are several tracks which contain source music and songs written to be heard in the background. (Redman also provides comprehensive liner notes, including a brief essay on the film and its music, and individual cue notes.)

The music of Dirty Harry will not be for every ear. While it is the first modern action movie score, it is not the template for what would become the more familiar musical pabulum of say, Van Helsing or the first Spider-Man. No, Dirty Harry is jazzy, bluesy, eerie, once in a while melancholy, and mostly spare. But whether you are a fan of Schifrin's style or not, whether you leave the disc in the CD changer or store it in the archives, the care the producers have taken in the restoration make Dirty Harry an excellent addition to any collector's library.

I know what you're thinking: did he give it five stars or only four? Well, to tell you the truth, in all this excitement I've kind of lost track myself. But being that this is a definitive Dirty Harry album and that it is the best the score has ever sounded, you have to ask yourself one question...

You know the rest.

Eric Lichtenfeld is the author of the forthcoming "Action Speaks Louder: Violence, Spectacle, and the American Action Movie" from Praeger Publishers.