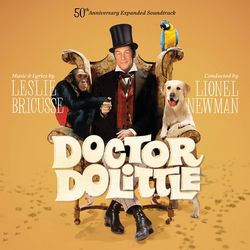 This deluxe 2-CD anniversary edition, meticulously produced, restored, mixed and mastered by Mike Matessino, from studio vault elements, in consultation with the composer, showcases a stunningly full ACT I and ACT II score presentation greatly expanded beyond the original Gold-selling 1967 album. A wealth of previously unreleased material includes the lush underscore arranged by Alexander Courage and Lionel Newman, with the presentation further enhanced by alternates and never-before-heard demo recordings by the legendary Rex Harrison. It's the long-awaited, definitive assembly of a classic musical score that has delighted fans of all ages for half a century. Matessino's exclusive, in-depth notes, with recollections from the composer, takes you behind the scenes of Dolittle's wonderful musical world and Jim Titus' art design herds the packaging together in classy fashion.